So last week I finished this fine tome – about two years after everybody else. 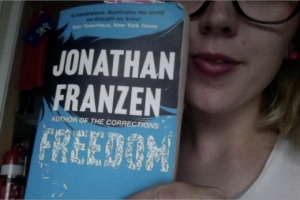 Freedom is dense with details about its characters that might seem superfluous at the time of reading but in retrospect contribute to the richness of their portrayal. The most tragic and funny of tragedy and comedy co-exist in this book and frequently in the same setting. The importance of its title is not fully graspable until you’re finished reading it, and if Freedom was not an option it could have easily been called This American Life, if, you know, that was not taken either. Jonathan Franzen illustrates the irony and extremes inherent in the modern tapestry of America through characters who experience suburban non-bliss, love, hate and absurdity. I’m always impressed when a writer can capture single moments with clarity, so allow me to quote from a memorable page (523):

“Then they wandered up Sixth Avenue like a couple drunk beyond caring what anyone thought of them, like red-handed murderers, Connie bra-less and wanton and attracting male stares, Joey in a state of testosterone heedlessness in which, if anyone had challenged him, he would have thrown a punch for the sheer joy of it. He was taking the step that needed to be taken, the step he’d been wanting to take since the first time his parents had said no to him. The fifty-block walk uptown with Connie, in a baking welter of honking cabs and filthy sidewalks, felt as long as his entire life before it.”

So in the wake of finishing Freedom I have decided to tackle this bad boy.

Or more appropriately, this bad girl. I feel like I have reached the point of young adult life where I can attempt a Russian classic with no ulterior motive, i.e. just wanting to look smart. So with clear eyes and full heart I have approached Anna Karenina. There is also the incentive to finish it before the latest film adaptation comes out. I have to admit, the trailer is full of swooning and corset-ripping and despair and ecstasy, and I love that stuff. I always feel a particular anxiety when a film is coming out that is based on a book that I haven’t read yet. It’s too bad that I didn’t read The Great Gatsby in Year 12 because now I have to add that to the list, and as far as I know, there is no new film adaptation of Brave New World in the works. On the other hand, I strolled into Life of Pi with my head held high.

But there is no time to waste, because this is the work ahead of me (before I am allowing myself to go on Book Depository again).

2 thoughts on “What everybody is reading”