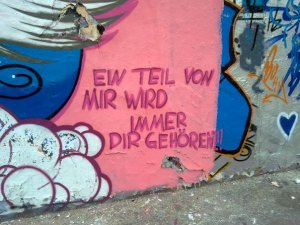 “A part of me will always belong to you.” (Street art at Mauerpark, Berlin)

By the time I had the necklace, it was too late to find out anything about it. I had never seen my grandmother wear it, but somehow I knew that she must have loved it. An oval pendant with a cut-out design of hieroglyphics, it would have reminded her of dusty bazaar from whence it came, in the days when far fewer people were as worldly as my grandmother was. So then it was my turn to love it, just like she’d loved me.

In the middle of an otherworldly European summer, I was forced to farewell the man I was convinced was my Prince Charming. He went home, and home was on the other side of Atlantic. It felt like being dumped by a cold, heavy wave. I went back to Berlin alone, feeling smaller than ever in the big grey city. “Come to Paris!” said my best friend, who was on a glamorous trip around the continent. I sensed it would be my only opportunity to be so miserable in such a luxurious setting. I went, and wandered around the streets, and the sticky heat and sunshine were surprisingly good medicine. On holiday in the shimmering alternate universe of Paris, I could pretend that I was riding some warm current, ultimate destination unknown, and just drift.

I got my first inkling that the necklace was missing when I arrived in my next destination, the brainy city of Basel. I hadn’t slept and had just shot across the countryside in a super fast train. Everything was new, and the necklace was not around my neck. It must have been squashed in my bag. But over the next few days, it did not reappear. By the time I left, it was making me distinctly uneasy to think about it. I was missing its shape in my hand, the feel of the cold chain on the back of my neck, and just knowing that we were travelling through unknown landscapes together.

But I was in denial. Surely my necklace wouldn’t just be gone. It was much too important an artifact, and it was mine to take care of. I didn’t lose important things the way other people seemed to, did I? Especially when the necklace was one of my last remaining mementos of my grandma Ethel, who had been everywhere, and been everything to us. I could only fantasise about the stories that those little silver-plated Egyptian figures would tell. Everywhere I went, I had had it hanging on my chest. It was my go-to item of glamour, because I always imagined my grandmother wearing it and reminding herself of exciting times. Having been twice left mysteriously at other people’s houses, it had always found its way back to me – but my luck had run out.

It had travelled halfway around the world with me, and now might be left in a Parisian hostel, or in a French train, or somewhere else entirely.

My Swiss hosts hadn’t seen it. In fact, I hadn’t seen it. With a lump in my throat, I lodged a lost property report with the railways, and never got a response. My necklace had left me. Without my necklace, and my prince, I didn’t feel like I had much left to hold onto. I was losing pieces of my life, one at a time. 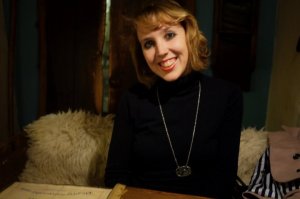 The necklace and me in happier times. (pic: Kate O’Dwyer)

I felt like even if the necklace turned up and showed itself and told me about all its adventures, I wouldn’t be worthy of putting it back on. My grandfather trusted me with my grandmother’s necklace, and I had let her down – my Big Ma, the woman with a million stories and a heart as big as the whole blue sky.

Switzerland in summer was a Technicolor wonder. And travelling alone had become my cause. But without my necklace I was more alone than ever.

One thought on “The Necklace”