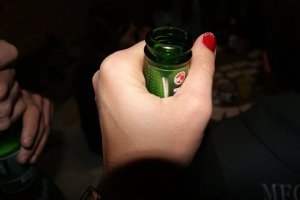 I had a few weeks left. At the end of these few weeks I would sit down in a plane and wave a teary goodbye to Berlin, the city of my imagination, the only place to truly be young and nocturnal and full of thoughts.

I woke up every day in a sharp melancholy, calculating how many more mornings I had of looking out on my snowy courtyard, holding a warm coffee mug. I spent the days looking at people on the street, feeling a bubbling jealousy – how is it that they were able to stay, when I had to leave? At night, usually for the whole night, I drank Weißbier with fellow foreigners as we all wondered when we’d see each other again once there were continents and oceans between us.

Some friends from Sydney were in town, and wanted to see some Berlin bars. I met them on a quiet, dark street behind Schönleinstraße. One of them had found out about this bar online – it was modelled on The Black Lodge. Like always around this time, I had a little lump in my throat that got bigger when I looked at anything at all.

We found the address of the bar. Silence, and nobody around. “Well, it said on the website that it’s meant to be open tonight,” said my friend. “It’s new.” She didn’t sound very disappointed. She was on holidays, and everything was equally exciting, I guessed. But I could count on my fingers the number of nights I had left to visit a bar like this. Soon I would be living my old life again, and it would be as if all of this never happened at all. So I was definitely disappointed.

I stepped up to the door of The Black Lodge and peered through the glass panel at the dark interior. It was definitely closed for business tonight, without explanation. A single light bulb was switched on somewhere inside, illuminating a narrow doorway and a few black and white tiles on the floor. It was authentic flooring from the TV show, and I imagined the dark red curtains that must have covered the walls in there, and the armchairs, and the people who would quote all the lines and talk about the chewing gum coming back into style and try to figure out how Twin Peaks could still give them nightmares. But I could only see that single patch of light.

It made me feel slightly, and strangely, afraid. There on that silent street, I suddenly felt the stillness of the night and the crispness of the cold air acutely. I imagined that just as I was looking into the frosty glass of the door, somebody was looking at me, from a window up above. It made me shiver.

“Do you think that this is a real bar?” I asked my friends. “I’m getting a weird feeling about it. Like, maybe it’s actually an art project.”

My two friends chuckled. “No, really!” I protested. Just then under the streetlights, it seemed true to me that somebody in Berlin would set up a bar’s façade sure to attract a certain type of young person, and then revel in that person’s disappointment while filming the whole episode with a fancy camera, all in the name of art. Stranger things had happened – were surely happening right now, a few streets over in Neukölln. And for a David Lynch-show-themed bar – it was too perfect.

Or maybe it was the cobblestones on the street, and the night in the city that was slowly eroding my logic. It was all too big and unfair. I couldn’t explain how it felt to know that I would soon be looking at the same night sky but on a different street, with different scents in the air, wearing sandals.

We gave up and walked into the night. Later, at home in Sydney, I heard that my friend had gone back to The Black Lodge and found people drinking inside. I couldn’t help but hate all of them.

Epilogue: I looked for The Black Lodge and found that there is nothing at its domain name. IT’S JUST TOO WEIRD.