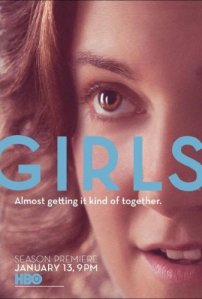 “I used to just like every guy who liked me*,” says Hannah to her handsome new not-date, explaining why she wants to be “rational” about “all this”, i.e. now she is in control of her life and doesn’t want to screw everything up. But of course that’s not true, because we’re all young and indecisive and becoming a grownup is one big mess. It’s all about secrets, ill-defined relationships, awkward parties and the impossible pain of breaking up or not being a genius. And we wouldn’t have it any other way, or at least that’s how it seems Girls and that’s why we all love it.

Shoshanna is learning to deal with the guy who deflowered her but didn’t want to be her boyfriend – a rite of passage, no? “You hurt my feelings but I can deal with it because I have my big-girl pants on.” Marnie gets fired and her mum tells her that she looks 30 years old. What a kick in the guts! And also the perfect insult to be levelled at a character in Girls because its entire landscape is lit up by the particular sad glow of being in your 20s and not knowing what to do about it. (All the people who know what I’m talking about should read this.)

I had to wait until the second-last scene to see the return of my favourite Girl Jessa. All you haters hear me out – to me, she’s the most complex, feisty, unashamed-but-actually-scared character and her continual triumph over banality reminds me of a few different women who I have known in my life. She’s still with her new surprise husband, and presumably they have just returned from their honeymoon. Of course I’m expecting their marriage to play out and end with hilarity and strangely defined anguish.

So it’s all happening again! The episodes are much too short and I know there won’t be enough of them, but I’m happy to see Girls return. If just for great lines like these:

-“Our lives are so entwined.”